Get your timed (45 mins) tickets on Eventbrite HERE
(Face mask required indoors, contactless temperature thermometer will be taken at the door)

During a global pandemic of the Coronavirus, international mass protests broke out after footage released of the brutal death of George Floyd. These protests sparked previous ongoing conversations on police brutality, racism, and white supremacy in America. This outrage has caused many artists in America to create visual memories of those who are victim to racist attacks and police brutality. Zenith Gallery strives to represent diverse voices responding to the enduring injustices against black people. While some works of art might respond to current conversations some celebrate black lives. 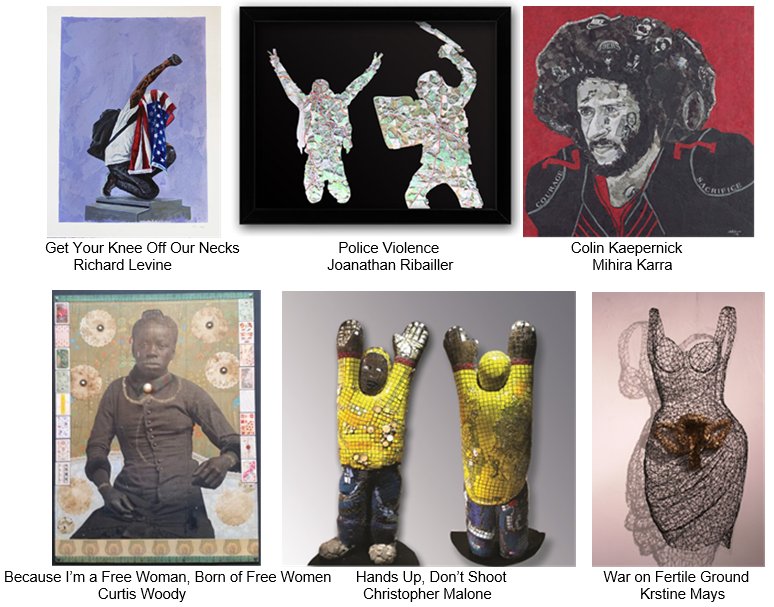 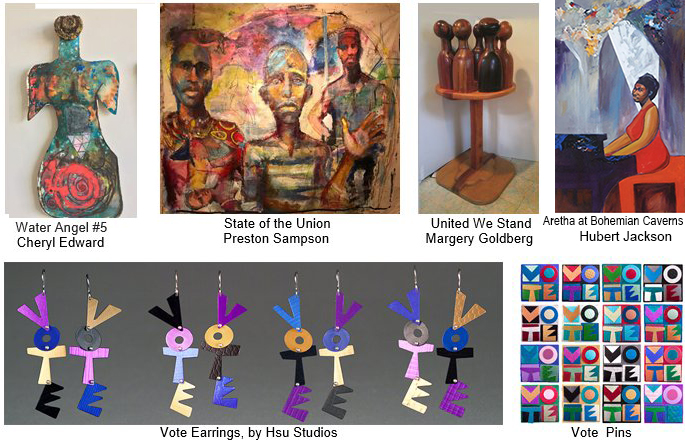 Doba Afolabi was born in the mountains of southwest Nigeria and credits his mother, who was a versatile dancer, as the fundamental force behind his flair for expression. Monet, Van Gogh, Degas, and Yoruba stylized carvings were all later influences on Afolabi. Later immigrating to the United States, Doba unites both of his experiences.

Rachael Bohlander uses bold colors, geometric forms and mixed media to create strong statements on the current climate in America. By using symbols such as the statue of Liberty and the American Flag, she challenges but also reminds us of how uniting these symbols can be.

Anne Bouie strives to make the invisible visible in the life of “modern” individuals and the community as a whole. She seeks to acknowledge and honor these universal, and ancient teachings of connectedness and meaning, keep tradition, and declare their relevance in and for our very modern, yet often, barren, lives. She believes these teachings—as well as those who held them– stay alive and remain with us to do as they have always done—help us be aware of our connection to the Invisible, and to one another; nourish and sustain us, give meaning to our individual and collective journeys, and enable us to heal and help “all our relations”.

William Buchanan is influenced by the recent increase in violence, arrogance, and anti-intellectualism which appear to be in proportion to the erosion of our social, moral, and political values. He is also inspired by a Native American parable entitled, “Two Wolves,” which describes the battle of good and evil within each of us and determines the winner of the battle is the wolf you feed.

Najee Dorsey has developed much in his craft over the years, and has become known for his mixed media collage, digital media collage images of little known and unsung historical figures, as well as nostalgic scenes from African American life in the southern United States. In his work, as Najee chronicles moments in Black life throughout history, he maintains that, “stories untold are stories forgotten”.

Bulsby Duncan represents the merging of his thoughts and perspectives on life with his love for bold colors. He uses his art to explore his creativity and articulate the world through his eyes. “Once you view my art, you will see the world as I see it and hopefully it will inspire you to unlock your own creative energy.”

Cheryl Edwards is inspired by familiar sources: human and political conditions, spirituality and mythology, cultural custom and patterns; and place. In the absence of the former (manifestations of energy), the physical aspects of place remain. By using the element of water gives Edwards a new dimension in how she discusses racial issues in this world. She investigates into the extent that water is responsible for the memory of self-identities.

Margery Goldberg uses exotic and domestic hardwoods as her medium and laminating and carving is her process. The result is sensuous, warm and unique, tactile and inviting. Each tree and the wood therein are unique, like humans no two are alike. Whether she carve a single piece of wood or laminate the wood for sculpture and furniture, carve and fabricate from logs or combine with neon, like the ancient carvers, she lets the spirit out of the wood.

Carol & Jean-Pierre Hsu are inspired to design enduring, vibrant artworks that transcend traditional form and complement everyone’s environment. Change is always important to them in their artistic endeavors; they continually explore new possibilities of design and technique, and have expanded from the small scale of jewelry to much more voluminous mobiles and sculpture.

Hubert Jackson’s recent work deals with the period of American history from its inception throughout the Civil War and in particular the spirits of those who have come and gone but remain anonymous and unaccounted for through war, slavery, poverty or the passage of time. Although they are no longer physically present, their spirits remain with us as they have become one with nature – embodied within the life forms that emerge from the earth. Jackson uses vegetation and artifacts specific to each subject in his mixed media artwork, which he obtains on site or purchases from collectors and relic hunters and then incorporates into the design.

Mihira Karra is fascinated with the potential of fabrics as a medium and inspired by the works of the old impressionist masters. She started sketching and using pastels as a child and realized her passion for portraiture and figurative art as a twelve year old when she sketched her first portraits of her great aunt and grandmother. She focused mainly on portraits of family and friends early on as she used them as live models to pose for her. She later used photographs as inspiration for figurative work.

Richard Levine’s love of travel and exploration spark the inspiration, both spiritual and visual that he derives from experiencing new landscape, people and culture which in turn invigorates his work and challenges him to both portray and understand our world. He paints and photographs in places where the weather, the traditions and the geography still dominate; where these elements identify and characterize a locale. Where he can still connect to what has gone before and one feels an authentic “sense of place”.

Christopher Malone is a self-taught artist who wants us to move past seeing dolls as just playthings for children, but rather as spiritual objects, capable of inspiring deep thoughts and heady visions in balance with our imaginations and our dreaming state.

Kristine Mays’ metal wire timelessly captures a fleeting moment that will last for decades. Her artwork points to the soul and spirit, transporting the viewer into another place. Memories and the way we have loved one another far outweigh our status or possessions — and yet sometimes a simple dress or a body in motion may trigger a memory from the past, allowing us to visit that which has imprinted our lives.

Joanathan Ribaillier works with colorful and textual antique maps (from roughly 1920 to 1970) because they symbolize the roads people travel and their journeys and struggles for a better life. Ribaillier’s family has a history of emigrating to new places from Vietnam, Kabylia (Northern Algeria), and France. His unique perspective on life brings a multicultural outlook to his map creations.

Preston Sampson uses color to represent the stream of consciousness, and experiences of the people in the paintings, and to bridge a gap from reality into the world of the paintings. His pieces all have a perennial quality that transcends any time. While primarily working in acrylics, Sampson also creates art with watercolors and mixed media collages.  Though his vibrant and broad brush strokes, Sampson gives the viewer the ability “to emote, to touch, to move you to the center of it all, to enable you to feel certain changes, like fleeting moments of memory.

Curtis Woody’s mixed media quilt paintings draw inspiration from historical connection points that join individuals, families, generations and communities. By richly layering historical images and objects his work invites viewers to step in closer, explore details, and create or reflect on their own stories of connection. Because of the multi-layering it is my expectation that the paintings become thoughtful, spiritual, interesting and sensitive creations.