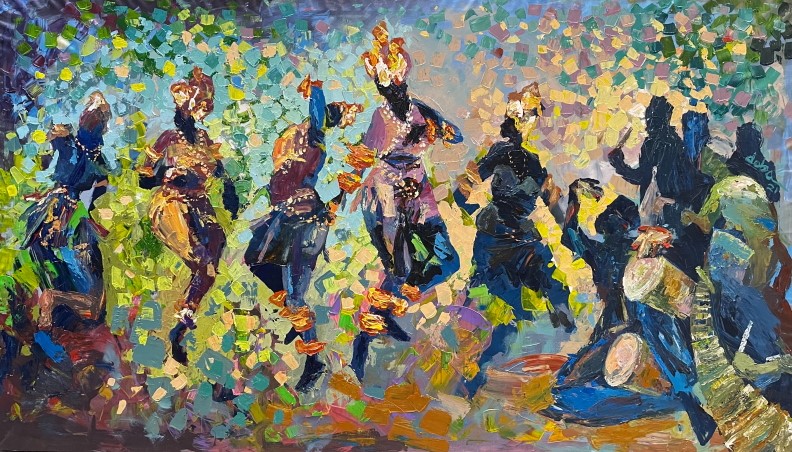 Doba Afolabi was born in the mountains of southwest Nigeria and credits his mother, who was a versatile dancer, as the fundamental force behind his flair for expression. Monet, Van Gogh, Degas and Yoruba stylized carvings were later influences on Afolabi. Doba studied at the famous Zaria Art School. While still in school, he became known as one of the “Zaria Rebels,” an artist’ school known for their experimental style and bold color palette. Briefly, he worked for the United Nations as a graphic designer. He also spent some time teaching art at Yaba Technical College, in Lagos, Nigeria, before eventually immigrating to New York City.

Afolabi has exhibited at many notable galleries such as the Dorsey Gallery, New York, that produced the likes of Romare Bearden, Otto Neal, and Dr Ojo.  Also recognized as one of the official artists of Soul Basel ArtAfrica Miami, and well known to the city of Miami Dade County Tourism, his piece served as a page headline for Basel visitors directory. Afolabi was recently selected by the Department of State, Art in Embassies Program, where his piece “MidDay Market I” exhibited at the American Embassy in Guinea.

Sheryll Cashin studied painting for years at the Corcoran School of Art, and was an active member of A. Salon, Ltd. artists’ cooperative (now known as DC Arts Studios) and in 1996 began selling large acrylic paintings of famous and ordinary African Americans. Early collectors of Cashin’s work included Peggy Cooper Cafritz, Ambassador Susan Rice and executive Robert Mallett. Known as an author and law professor at Georgetown Law, Cashin’s latest book, White Space, Black Hood illuminates residential caste and the systems of American racial inequality. “I made these collages as an act of self-care in a time of ugliness. In works like, Breonna Taylor, Her Life Mattered I surround Black women in nature and imaging them being healed. I was healed as I produced them. Beauty and internal peace are their own form of resistance.”

Bernie Houston graduated from Savannah College of Art and Design in 1984 and has been a driftwood sculptor ever since. Houston spends his time on the Chesapeake, finding that perfect piece of driftwood for his carefully composed sculptures. Each piece is shaped by nature and inspired from its natural structure. After visualizing each driftwood piece, he cures, sands, carves, paints and polishes each creation. He sculpts everything from animals to people to objects. Because nature does not mimic itself, his entire body of work is one-of-a-kind. There is not a single piece like it on the planet

Chris Malone is a self-taught artist and former Zookeeper. During lock-down Chris has been experimenting with different styles and techniques with creativity in ceramic sculpture. Chris believes that we must allow ourselves to take chances with our creativity and “think outside of the box.” Shown widely around the US his art graces collections nationally and internationally.