Today we are bringing you art activate your sense of humor, so needed during these challenging times. Below are quotes from famous and not so famous people throughout history, but first here is some information on our artists.

Caroline Benchetrit’s narrative style “is inspired by a world without rules, where joy breaks all boundaries and dreams come true if you believe they do!”
Stephen Hansen has kept us laughing for over 40 years. We will be showing his “Great Moments” this fall opening October 9th. His parody is developed by taking famous masterpiece paintings and adding his paper mache figure in the picture, posing as the painter and making us laugh.
Inspired by the natural design structure of the wood itself, Bernie Houston sculpts each figure from a found solid branch or tree limb, taking advantage of the natural form to lead each unique portrayal. 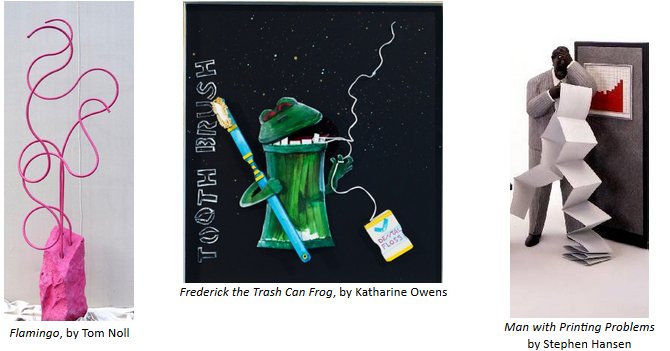 HUMOR QUOTES
Laughter is the Best Medicine
Every survival kit should include a sense of humor
Humor is a reminder that no matter how high the throne one sits on, one sits on one’s bottom. ~ Taki
Humor is perhaps a sense of intellectual perspective: an awareness that some things are really important, others not; and that the two kinds are most oddly jumbled in everyday affairs. ~Christopher Morley
Imagination was given to man to compensate him for what he is not, a sense of humor to console him for what he is- Francis Bacon
Humor is reason gone mad.  ~Groucho Marx
Money can’t buy happiness, but it sure makes misery a lot easier to bear. ~ Dorothy Parker
Humor is the good-natured side of a truth. ~Mark Twain
Humor is mankind’s greatest blessing. ~Mark Twain
Humor is, I think, the subtlest and chanciest of literary forms. It is surely not accidental that there are a thousand novelists, essayists, poets or journalists for each humorist. It is a long, long time between James Thurbers. ~Leo Rosten
I am thankful for laughter, except when milk comes out of my nose. ~Woody Allen
Laughter is the shortest distance between two people. ~Victor Borge
There is a purifying power in laughter. It is truth in palatable form. It is instant vacation. Seeing the comical side of many situations makes life a great deal easier. It’s like riding through life on sensitive springs that ease every jolt. ~Eugene P. Bertin, 1968