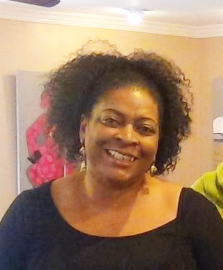 Cassandra M. Gillens is a self-taught artist currently residing in North Carolina. Born in Boston, some of her earliest memories are of drawing with colored chalk on the sidewalks of her childhood neighborhood of Roxbury. Cassandra also has fond memories of visits to South Carolina to visit family. These memories have moved her to paint visions of The Low Country’s southern culture. Growing up in Roxbury, Gillens dreamt of one day returning to The Low Country – a place that had won her heart and spirit. Upon her return as an adult, she swiftly reconnected with her people, and the culture she so loved. Cassandra’s paintings clearly show that love and those connections, with their depiction of the vivid colors of the southern seasons and their images of good ol’ Southern living. Cassandra is a member of Beaufort Arts Association. Her art can be found on display throughout the Low Country, and in collections held in various states throughout America. Gillens was a Featured Artist on HGTV’s 2013 Dream Home; a featured U.S. artist for A. R. T. Revolution, held in Taipei, Taiwan 2012; and featured in the October ‘08 issue of Southern Living Magazine. Her art is also in “Nights in Rodanthe.”