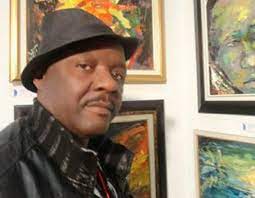 DOBA AFOLABI was born in the mountains of southwest Nigeria and credits his mother, who was a versatile dancer, as the fundamental force behind his flair for expression. Monet, Van Gogh, Degas and Yoruba stylized carvings were later influences on Afolabi. Doba studied at the famous Zaria Art School. While still in school he became known as one of the “Zaria Rebels,” an artists’ school known for their experimental style and bold color palette. Briefly, he worked for the United Nations as a graphic designer. He also spent some time teaching art at Yaba Technical College, in Lagos, Nigeria, before eventually immigrating to New York City. He is currently based in Brooklyn. His first solo exhibit, “Buffalo Soldier” was in 1999, in North East Miami, Florida, at Asmar B Art Gallery.  Since that time, he has been an annual presence at the Black History Month art shows featured on the campus of Florida International University. In addition to showing with Zenith Gallery, he is also represented by Dorsey Gallery in New York.