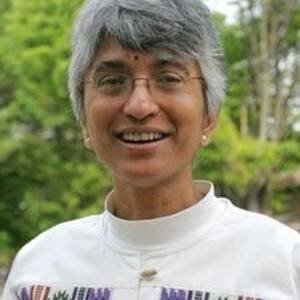 Mihira V. Karra is a fabric collage artist based in Vienna, Virginia. Born in Calcutta, India, she began sketching with pencil and pastels as a child. Her life-long passion for art began in her childhood in India. It was her cousin’s creation of beautiful portraits with what would be considered primitive materials – charcoal, rice starch, and ash sketches – that inspired her. She began to view horses and dancers with an artist’s eye, and captured their grace in her own sketches.

She was 12 years old when she discovered portraiture. A patient grandmother and great-aunt stood model for her first portraits. The very positive and encouraging response to these portraits led her to focus on portraiture and the human face and figure. Her tools remained pencils and oil pastels through high school and college in India, with women as her focus, a choice inspired by the presence of strong, trailblazing women in her family! When her grandmother was widowed at age eighteen, she returned to school and became the first woman engineer in South Asia. Mihira wanted to capture her life, and the many unsung lives of other women on canvas. However, the grace, strength, and beauty of horses and dancers the world over have continued to entrance her.

She soon realized her passion for portraiture, and pursued art through high school. However, art had to remain a hobby when it came time to carve out a career. The possibility of earning a viable living through art was quite bleak in the 1970s. Science became a focus as she earned several degrees in the US and began her career in international development. Family and children followed, once again obliging her to relegate her passion for art to the background.

A life-altering event in 2012 returned her to the world of art as expressed through fabric. In 2013, she attended a workshop on collaging. Her career in international development heightened her awareness of the rich fabric of art around the world. She developed a collage technique that revealed the subject’s interests and history in their faces. Fabric collage also allowed her to return to her first love: horses and dancers, works that have also been popular. At the request of friends, she re-explored the world of pencil and color pencil. Recent experiments with charcoal and paint – very new media for me – are also receiving a lot of praise.

“WHY?” This question accompanies every interview that Mihira gives: “Why do I do what I do?” Why does she feel compelled to doodle, sketch, spend hours of back-breaking collaging? The ability to capture beauty, strength, and grace, whether human, animal or the environment, the challenge of capturing a moment, an expression, a feeling, a relationship: these are memorable and tremendously rewarding. The wonderful reactions of her subjects to their portraits, to the way they can re-live all the events and people that are important to them: that is Mihira’s response to “WHY?”