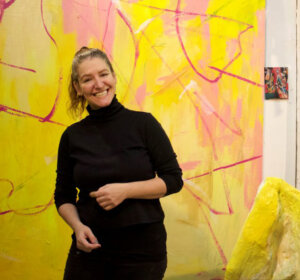 “Gesture versus geometric. The expressive versus the formal. These are not “either/or” propositions. My work explores the space between geometric structure and expressive gesture, utilizing the tension between the two opposing forces to create new forms.

These new creations are unique and independent of anything found in the exiting world. They are neither abstract nor representational, but sui genersis. While a consistent process is important and helps navigate between the geometric and expressive, the process is not the content. The content is the new form, each of which has its own unique personality and characteristics, allowing even a two-dimensional work to take on the identity of a sculptural, three-dimensional thing.”

Rachael Bohlander, a mixed media artist, resides in Washington, D.C., dividing her time between D.C. and New York City.  In addition to D.C. and New York, Ms. Bohlander has lived and worked in New Orleans, Amsterdam, and Munich, Germany, among other cities.  She has traveled extensively solo by motorcycle throughout the U.S. and India, drawing upon those experiences to inform her artwork.