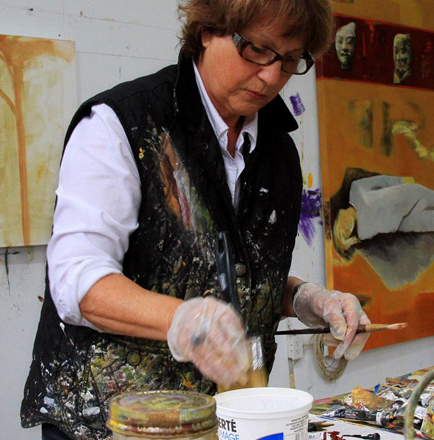 Born in the city of Granby, Renée duRocher holds a Bachelor’s degree in Arts Plastiques from UQÀM and is the recipient of numerous prizes and distinctions. Deeply attached to her town, she lives and works in Granby and is involved its cultural life.

Active in the visual arts milieu since 1976, duRocher has a number of solo and group shows to her credit, both in Canada and abroad, including some in New York and Washington. Her works are featured in several private and public collections in Quebec and the United States.

These include the Government of Canada, the City of Granby, the Musée de Beaux-arts de Sherbrooke, the Musée Pierre Boucher, the Centre d’Arts Orford, Pratt & Whitney Toronto, the Desjardins Collection and RBC, as well as some American collectors.

Appreciated and recognized by her peers and art critics, duRocher’s paintings are also leaving their mark on Quebec’s art history, as reviews of her work by art historians appear in visual arts journals and monographs.

Renée duRocher’s artistic approach is characterized by a figurative and intuitive painting. For many years now, her work has been exploring and calling into question the concepts of duration, time and history that permeate the historical places she visits on her trips, those sacred and archaeological sites that are transposed into her paintings. She developed a pictorial narrative, often as a series of works, in which the fragility of human life appears as a counterpart to the permanency and immutability of those sites. Lasting from two to four years, those series become a vast space where historical and imaginary places intersect. On the aesthetic level, duRocher, a consumed colorist, fills the canvas with broad strokes of rich and contrasting colors. As a result, transparency and opacity, figuration and abstraction harmoniously coexist. A very intense moment for the artist, it is at this stage in the creative process that the painting takes form and experimentation is called for. Transposing to a painting, through a distinct language and a renewed vision, those fictitious and historical frameworks requires an endless questioning of form and content alike. Renée duRocher’s works invite the eye and the mind into realms resonating with history through a contemporary artistic approach. This coexistence of genres is constantly renewed without ever breaking away from the humanistic references present in the artist’s creations. It is not only a question of history or remnants, but also, and primarily, a question of human nature and its relation to the ephemeral, the divine, and eternity. These are concepts that outlive ages and civilizations, and they are deeply anchored in Renée duRocher’s space-time.