Zenith Gallery is proud to have five of our artists in Black Classicism in the Visual Arts. This exhibition was a main element at the international conference Eos, a scholarly society associated with the Society of Classical Studies, which is dedicated to Ancient Rome and Greek influence in Africana art. Zenith Gallery artist, Hubert Jackson, won first place at the conference, on January 3 at Busboys and Poets, with his piece “Crossing the Boundaries of Time and Place”. Zenith Artists in the exhibition work encompasses the themes of primarily contemporary African American and African Diaspora artists whose artwork references the classics and mythology, or artists responding to Greco-Roman antiquity. 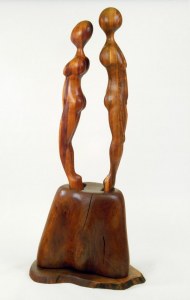 He She Tree by Margery Goldberg

Margery E. Goldberg’s wood sculptures derive their essence the same way the ancient carvers in Africa did by believing they let the spirit out of the wood. To Goldberg, her work is related and represents all people, it is pancultural. She is inspired and influenced by African, Greek and Egyptian artwork, incorporating their ancient elements like hieroglyphics and astrology in her figurative sculptures.

Carolyn Goodridge’s work is a marriage of Eastern philosophy and Western science in which she utilizes the ancient process of encaustic, melted beeswax. Her abstracted landscapes are inspired from music and color with a historical approach, which she calls Visual Songs. To Goodridge, the radiance of nature is audible as well as visual. The paintings are emotional attunements to nature’s elements: sun’s fire, the wind, water, and Mother Earth. Each work whispers a glimpse of a relentlessly churning life. 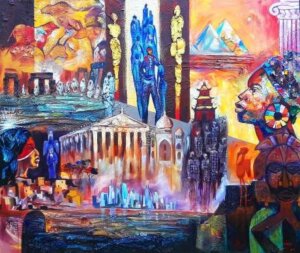 Crossing Boundaries of Space and Time by Hubert Jackson

Hubert Jackson explores human identity, history, and sites and events that are part of African American existence and history. He incorporates ancient Greek temples, Egyptian pyramids, and other historical sites that are part of African American existence as backgrounds to contemporary images while also incorporating African symbols in his mixed media artworks. His work honors people of the past by encouraging conversations between different cultures and time periods.

Ibou N’Diaye is a traditional Malian sculptor. He comes from a region in Mali known as “Dogon Country” which is known as a center for African Sculpture. He learned to sculpt using traditional tools such as hatchets, chisels, files and adzes. He prefers to work with very hard woods, such as ebony and mahogany. When he sculpts, he feels as though he recovers hundreds of years of lost harmony of the people, and it is up to artists to recover the harmony people held in the past. His sculptures embody this rediscovery.