Our Country owes an enormous gratitude to the African Americans who helped build our country and again saved our country from tyranny. Following a turbulent but momentous year, February marks a month of celebration with Black History Month. Zenith Gallery wants to celebrate our Black History month by featuring African American and some African artists who share their culture with all of us. 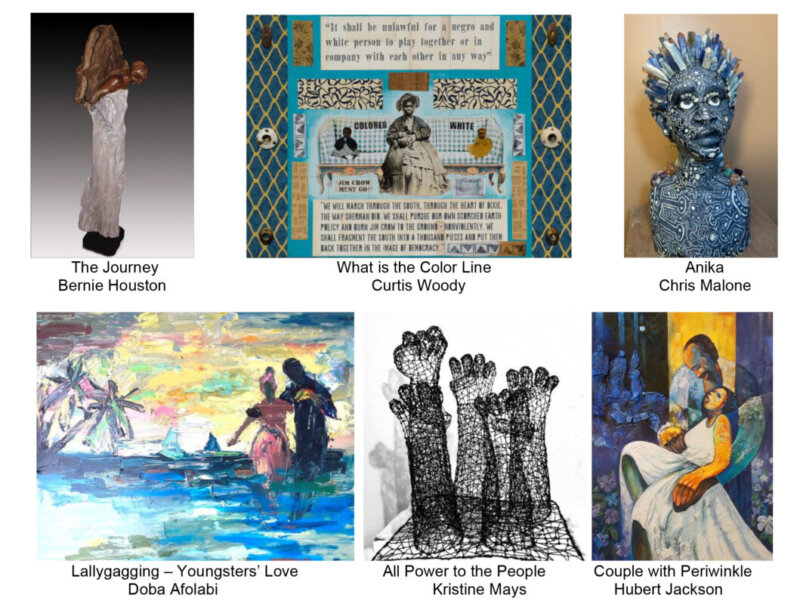 Doba Afolabi was born in the mountains of southwest Nigeria and credits his mother, who was a versatile dancer, as the fundamental force behind his flair for expression. Monet, Van Gogh, Degas and Yoruba stylized carvings were later influences on Afolabi. Doba studied at the famous Zaria Art School. While still in school, he became known as one of the “Zaria Rebels,” an artist’ school known for their experimental style and bold color palette. Briefly, he worked for the United Nations as a graphic designer. He also spent some time teaching art at Yaba Technical College, in Lagos, Nigeria, before eventually immigrating to New York City.

Carolyn Goodridge, born in Port of Spain, Trinidad, West Indies and immigrated to the U.S. in 1963. Goodridge was brought up in a Pentecostal environment and later became widely read in Eastern philosophies.  She landed in the Kwan Um School of Zen, residing at their Chogye International Zen Center in New York by age 19. The late Zen Master Seung Sahn Sunim taught the artist about “Zen mind.” Her artwork is broadly inspired by these teachings. Goodridge states: “The materials used in my work are organic: melted beeswax with natural pigments, resin made of sap from Malaysian fir trees, rice paper, wood and sometimes glass. Using encaustic, I enjoy contrasting, not only organic and geometrical shapes, but also smooth and rough texture, as well as dull and shiny reflective surfaces.

Bernie Houston graduated from Savannah College of Art and Design in 1984 and has been a driftwood sculptor ever since. Houston spends his time on the Chesapeake, finding that perfect piece of driftwood for his carefully composed sculptures. Each piece is shaped by nature and inspired from its natural structure. After visualizing each driftwood piece, he cures, sands, carves, paints and polishes each creation. He sculpts everything from animals to people to objects. Because nature does not mimic itself, his entire body of work is one-of-a-kind. There is not a single piece like it on the planet

Hubert Jackson was born in Culpeper, Virginia. After graduating from Virginia State University, he moved to Washington D.C in 1971 and earned his MA in painting from Howard University. In the early 1970s, he participated in the historical national movement of community-based mural projects under the advisement and mentorship of master artist Hughie Lee-Smith. Jackson’s work is in a number of private collections throughout the U.S. and has been shown in foreign countries such as Gabon, Ghana, Guinea, Lesotho, New Guinea and Rwanda through the Artist-in-Embassies Program, run by the U.S. Department of State.

Chris Malone is a self-taught artist who asks us to move past seeing dolls as just playthings for children, but rather as spiritual objects, capable of inspiring deep thoughts and heady visions in balance with our imaginations and our dreaming state. He believes that how far you take this interpretation of the capability of his dolls is up to you. In his words: “From the beginning of recorded time, all over the world, people have been making dolls. Dolls have been children’s playthings and have also been used to bridge the gap between our physical world and the spiritual realm…. Like most traditions… there’s so much more to the story (once you dig a little deeper).”

Kristine Mays, a San Francisco native has been an exhibiting artist since 1993. She was the Grand Finale Winner in 2015 of the 5th Annual Bombay Sapphire Artisan Series National Competition. Seeking to create impact and change with her art, Kristine has participated in raising thousands of dollars for AIDS research through the sale of her work by collaborating with organizations like Visual Aid, the San Francisco Alliance Health Project and WE-Actx. Mays’ art is formed from hundreds of individual pieces of wire and has developed a way of expressing the human form through wire.

Curtis Woody refers to his artworks as “mixed media quilt paintings.’ Woody’s mixed media quilt paintings start with hand cut museum board blocks that are painted, embellished, scratched, and merged together to form extremely well-composed, thought provoking collages that are not terribly pre-planned, but rather, let the feelings and emotions of the overall design dictate how each block fits together. Woody allows the colors, patterns, and textures to direct these compositions. Many of his pieces include replicas of vintage newspaper advertisement, newspaper articles, or photographs – all included because they accentuate the composition, while adding a symbolic richness to the work. The result is a work that strikes the balance between spontaneity and a carefully planned composition of historical relevance.