Zenith Gallery has begun the New Year with a new exhibit “Full Circle.” The show will be on display at our location at 1111 Pennsylvania Ave, NW, Washington, DC 20004. The show dates are January 13th – April 30th. The show features the work of two artists who work in different materials but who both utilize the motif of the circle (sometimes in two dimensions, sometimes in three). In contemplating this motif, we realized that the symbolism of this shape is quite appropriate for a show ushering in the New Year.

Zenith has put together a synopsis of some of the more intriguing uses of the circle motif in art, architecture, and culture. Circles are used in art to pull the viewer into the piece. Landscape paintings will use circles to make the viewer feel that they are in the landscape. Other symbols will use circles to include the viewers. A cross with a circle around it will include the viewer in the power of the cross. The cross is sacred and divine and the circle is used to make the viewer feel the same way. Circles unite people, and make people feel whole. The shape of the circle has been used as a symbol since the beginning of time. The circle can represent the power of the female, a symbol for a goddess, and the sun. It can represent infinity, being complete, and being whole.

The meaning of the circle as a symbol is universal, although how it is interpreted will vary from culture to culture. It is seen as a divine sign, sacred to several cultures. For example, quite a few Native American tribes saw the circle as a powerful symbol. The Sioux, one of these tribes, saw the circle as the sun, and as the moon, and themselves as the children of the moon. They therefore used the circle as an abstract symbol, meant to represent their tribe, when painting their shields, their horses, and their teepees – the closest approximation would be the use by Americans of the colors red, white, and blue to represent our nationality and our political affiliation. The ancient Celts used the circle for protection. They believed neither enemy nor evil could cross the boundary. Celtics saw the circle as a symbol of space and the universe.  The ancient Chinese use the circle to symbolize heaven, and a square to symbolize earth. Chinese art has used squares inside of circles. They used the square inside the circle to represent heaven and earth being united. The yin yang symbol is made up of circles. It will represent the two sides of balance.

In 1947, a fashion designer by the name of Elsa Schiaparelli introduced the color hot pink to western fashion, and by extension Western culture. She called the shade Shocking Pink, though today the color is more well-known as “magenta.” Like many artists who use color and form to create works of art that display abstract forms in a rhythmic pattern, Zenith artist Carol Schepps is also clearly inspired by how colors such as shocking pink and screaming yellow bounce off one another, yet you can sense through 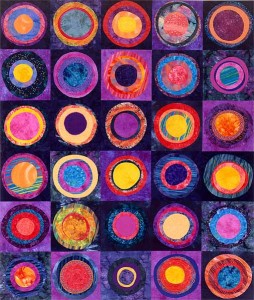 the titles she gives her work that she is also celebrating the sun, Mother Earth, and the beauty of natural phenomena.

In Zen Buddhism, an ensō is a circle that is hand-drawn in one or two uninhibited brushstrokes to express a moment, which the mind is free to let the body create only when the mind has achieved, through meditation, a state wherein one’s thoughts can best be described as ‘nothingness.’ The ensō symbolizes absolute enlightenment, strength, elegance, the universe, and mu (the void). It is characterized by a minimalist aesthetic born of Japanese design sensibilities.   This spiritual practice of drawing ensō or writing Japanese calligraphy for self-realization is called hitsuzendō (way of the brush). Some artists draw ensō with an opening in the circle, while others close the circle. 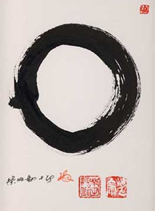 Now let’s look at another piece of work from this recent Zenith Show “Full Circle.” Here is a sculpture by artist Len Harris, titled “Still a Chance.” The repeating circle within circle motif here is interesting for several reasons. First, because as it is repeating its’ self over and over, it puts one in mind of electrons spinning around within an atom – as well as the orbits of the planets in our solar system around the sun. The piece is wonderfully crafted, and you get the sense of a real mastery of engineering – in fact, it may come as little surprise to learn that Len Harris formally worked as an engineer at NASA. Having said this, another component of this sculpture that is worth noting is the subtle way it embraces the wabi-sabi aesthetic in tandem with the superlative craftsmanship – not one of those ‘circles’ is perfectly round. Finally, we want to remark on how much we enjoy the use of light and dark tones in the wood, which gives the piece a sense of being illuminated from within and adds to it’s visual appeal. 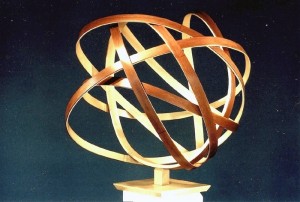 On display at Zenith’s “1111 Sculpture Space”

The creator of the first modern abstract paintings, Wassily Kandinsky was an influential Russian painter and art theorist. In his youth, he studied law and economics at the University of Moscow. He was 30 years old when he began to study art, at the University of Munich. He was not immediately accepted into the school as an art student, and so in the meantime he began learning art independently, gaining artistic insight from Monet’s Haystacks and Richard Wagner’s musical composition Lohengrin. The devotion to inner beauty remained a central theme in his art. Let’s look at one piece by Kandinsky, Circles in a Circle, to delve a bit further into his artistic process and his use of the circle motif: 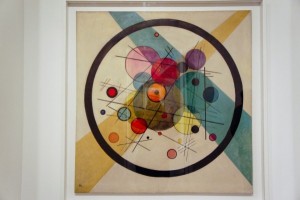 Wassily Kandinsky
“Circles in a Circle”
Circa: 1923
Oil on Canvas
Philadelphia Museum of Art

Circles in a Circle demonstrates Wassily Kandinsky’s distinctive style from the early 1920s, a period of time when he began teaching at the Bauhaus in Weimar, Germany, and subsequently moved away from a spontaneous painting style and towards a more geometric composition. In this work, a thick black circle surrounds twenty-six overlapping circles of varying sizes and colors, many of them intersected by straight black lines. In a letter of 1931, he described Circles in a Circle as “the first picture of mine to bring the theme of circles to the foreground.” Two strobes of blue and yellow extending from the top corners cross toward the center of the piece, changing the colors of the circles where they overlap. Although Circles in a Circle is distinctly different from Kandinsky’s paintings of the beginning years of the twentieth century, it reflects his continued belief that certain colors and shapes signify emotions that can be codified and combined into a whole, reflecting the harmony of the cosmos. For Kandinsky, the circle, the most elementary of forms, had symbolic, cosmic significance. In fact, he once famously wrote that: “the circle is the synthesis of the greatest oppositions. It combines the concentric and the exocentric in a single form, and in balance.”