The place was packed, the mezze delicious, the art stupendous and the artists’ talks enlightening.  On Thursday evening August 31, 2017, Zenith Gallery’s Resist show artists were 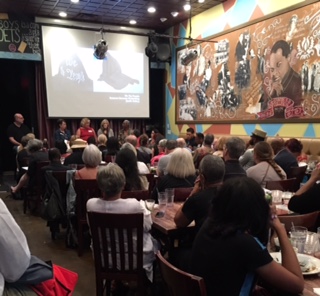 Ms. Goldberg, in her introductory remarks noted that nothing is out of the norm for artists or for anything anymore.  “Everything is shock and awe. So much of art is what’s on our minds.  I wanted to give artists an opportunity to express ourselves, because that is what we do.”  She then presented her Trump-Putin VooDoo DooDoo doll, (which has to be seen to be believed) in a Lego boat, adorned with Russian and American flags, with sharks circling.  Eliciting both laughter and cheers, it could only be bested by her Scream doll, recalling the Munch painting, because, “Present events and policies make us all want to scream”.   (For further evidence of Margery’s dramatic prowess, see Zenith’s video of artists screaming along with the doll).  She ended her intro by noting “Nobody can make this stuff up.”

Carol Rhodes Dyson, Busboys and Poets Curator, who founded the Social Impact Arts Collective, then took the stage to introduce the panels and pose questions: 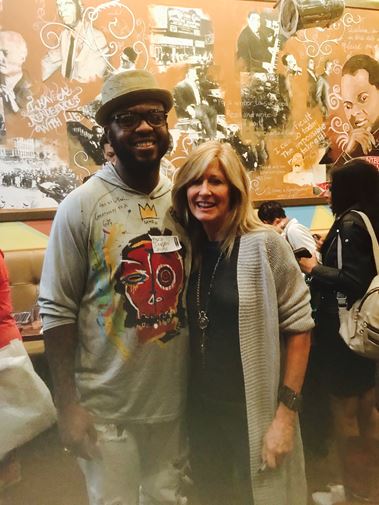 Preston Sampson was up first.  He talked about his identification as a black male who grew up in the 60s.  His art is about young men and empowerment.  He noted that the whole country is bothered now, compared to the 60’s. He spoke of his hero, Muhammed Ali who gave up a lot to fight for his rights.   His work, depicting a raised fist, references the black Olympic athlete Tommie Smith.  Speaking of Sampson’s concern with creeping apathy, he uses the symbol of the raised clenched fist to remind us,  “Don’t Give In”, as Ali and Smith didn’t.

Next up was Lea Craigie-Marshall, gloriously arrayed in a dress lettered with “Resist” down the front, whose multi-media work, Burn It Down (at 5th and K, Busboys and Poets) shows a U.S. map in flames with Trump sitting on top because he is burning it all down; love, equality, all the good things.  Craigie-Marshall’s painting, Cabinet of Horrors, speaks about Russian involvement in American politics, depicting  Betsy DeVos, Rex Tillerson and Steve Bannon with blood dripping from their mouths, like, in her words, “a horror movie, because we are living in one.”

Nancy Nesvet spoke of the importance of the Resist show in showing work that can be read by all, and her paintings of icebergs and polar bears threatened by environmental crises, including But if All the Seas Would Rise at the Resist show on Iris Street. Her photo collage, Women’s March at Takoma Busboys and Poets is comprised of photographs of the Women’s March, showing all the factions represented. 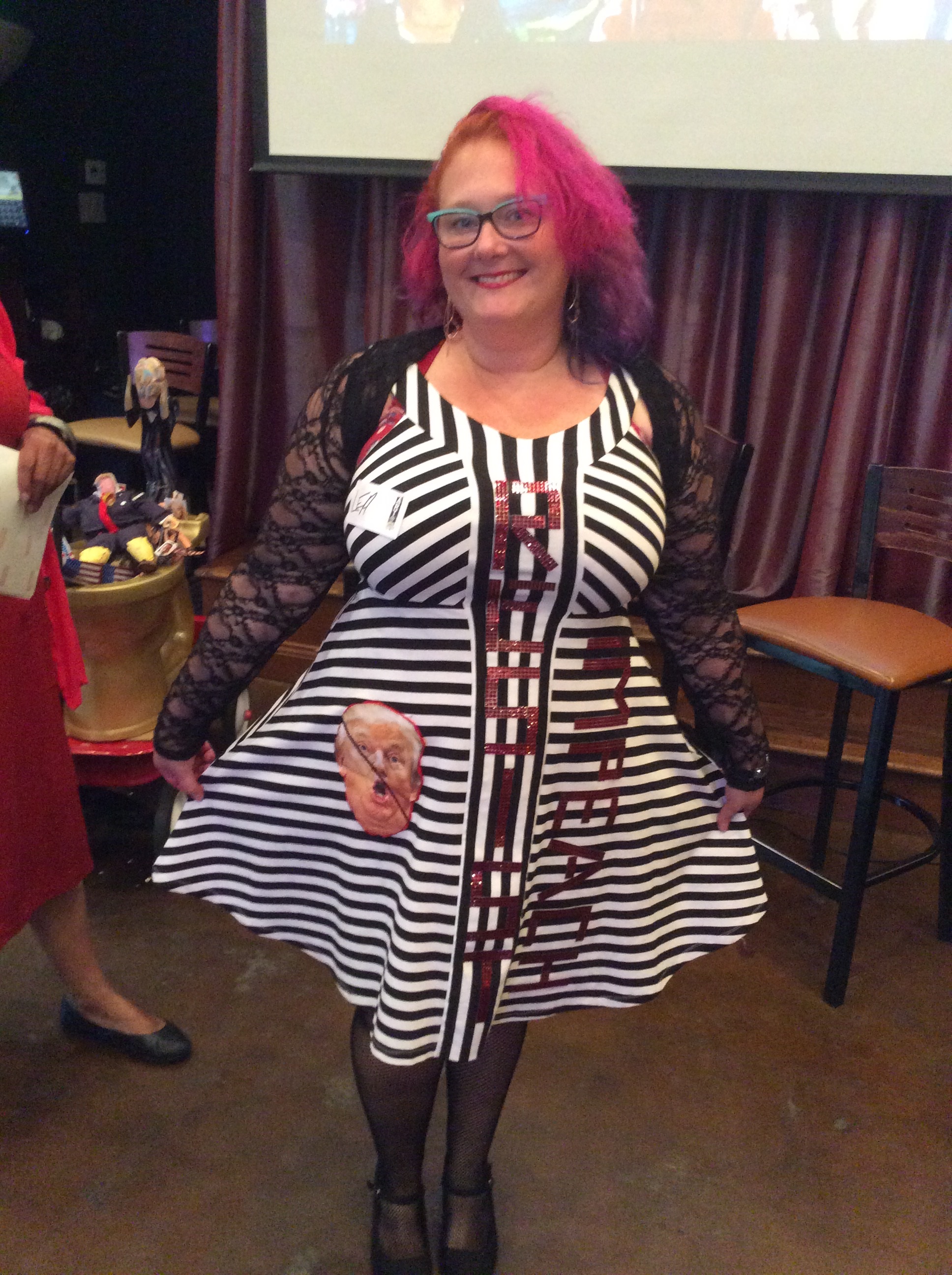 Bulsby Duncan pointed up to his painting on the screen, Breaking News, which he painted because “half the stuff they show us is what they want us to see,” and to his painting including Freddie Gray appropriately called, The Line Up.  By asking, “Who is Next?” in the painting, Bulsby answered, “We don’t know, but we do know.”  Chilling words, chilling image. His representation of Trayvon Martin, Final Statement, emphasizes his viewpoint that “You don’t realize it, but you’re part of the problem”.  And we all are.

In the next panel, Ms. Dyson asked artists about the connection between materials used and their work. The first panelist to present, Elizabeth Eby, put the musical imprimatur on the show, pointing out that Aretha Franklin’s lyrics from “Respect” were constantly playing in her head as she worked.  Calling herself a found object artist and gardener, Ms. Eby’s work, entitled Alley Cat was inspired by a mop-like plant she then shredded, because for her, the administration is shredding everything we stand for.

Anne Bouie spoke next.  A historian and educator by training who grew up in segregated Miami, Ms. Bouie was influenced by plants she saw at her grandmother’s farm, leading to her practice referencing “the earth and the gifts this shared place gives to all of us.” In her Which Way Out No. 1, she depicts visual cues.  As Southern vernacular work uses what we have, “found objects”, she uses those things in our environment that we walk by, not seeing them.  Her message is to appreciate the earth and the quilt pieces, barn wood and arrow shapes she uses, and understand it is a textile piece of codes to be read.

Thalia Doukas considers herself a public artist, displaying in non-traditional places.  She has noticed that kids and artists see faces where they shouldn’t, adding “This political climate colors faces I find.” In her piece, Reflect, which she asks us all to do, the mouth is a mirror with teeth that spell out Reflect, so viewers can see themselves in it, and reflect because we need to.   She is truly asking us to put our minds where our mouth is. 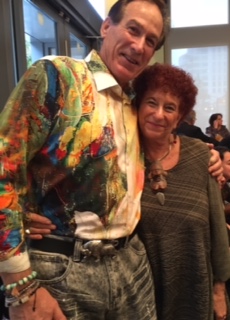 into the mix with Ms. Doukas’ sculpture, Putin’s Fancy Bear, made from an antique chair back that looked like a Bear face.    She enhanced it with teeth and a viola bridge for a nose.  She made this piece to emphasize that someone (and presumably the spymaster, Putin) is listening and watching all the time.

In the third panel, Andrew Wohl referenced his serendipitous discovery of a crushed beer can depicting the stripes of the flag with Lady Liberty in blue, by the side of the road entitled Lady Liberty. All he needed to do was photograph the can to let it speak.

Also speaking about his work, Curtis Woody’s Mixed Media Quilt Painting, My Soul Has Grown Deep, uses southern vernacular media, imprinted with images of present-day struggles and portraits of African-Americans to show that we must keep resisting.

Cheryl Edwards spoke of her drawing, Black Artist Matters I which ponders the placement of African –American Artists in the canon of American artists.

In a Q&A with the audience, Bulsby Duncan acknowledged the edginess of his work, emphasizing that he wants to “push the limits and get your attention”.  He went on to remind us that a picture is worth a thousand words but that his work “has about 100,000 words so I let the canvas do the talking.  The work speaks for itself.” And it does, Buzz, loud and clear. 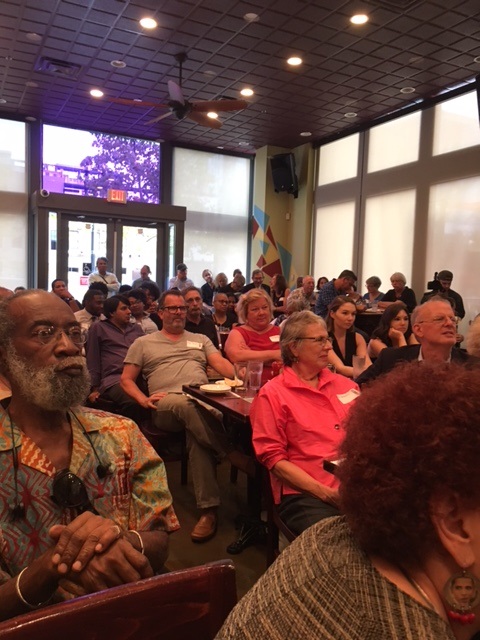 The evening ended with thanks to Andy Shallal, Margery Goldberg, Carol Rhodes-Dyson and Celinda Lake of Lake Research Partners for their judging, support and awards.

Funded by Lake Research Partners, the awards included a well-deserved first place to Bulsby Duncan, second place to the illustrious Rachael Bohlander and third place to the sculptor and fashion icon Lea Craigie-Marshall.  Honorable mentions, donated by Andy Shallal of Busboys and Poets went to Sally Kauffman for her paintings, Rise and Day 2, depicting the Women’s March, Nancy Nesvet and Leda Black.

Special thanks to Margery Goldberg, captain and director of the merry artists of Zenith, who ended the evening with her declaration that “You have to have guts to be an artist. It’s about your soul.  Artists know how to tell truth to power.”

Resist is at Busboys and Poets Takoma, City Vista, 5th and K NW, Brookland, and Shirlington until October 15, and at Zenith Gallery, 1429 Iris St. NW until September 30.   Don’t miss it, and let us know what you think and are thinking.  And always, Resist.

For a full video of the panels, see part one and two below. We are also featured on YouTube, Facebook and other social media sites.