Independence Day
What is Independence Day? Is independence freedom? Does independence mean freedom? Are we free? What does that even mean? Who is independent? How long does it take to receive freedom? We still do not have freedom when Black people are walking down the street and getting stopped for no good reason whatsoever and end up dead. When over 700,000 residents in DC cannot vote but still must pay taxes – is that free? When states with little population get to decide who the president is – is that free? When our government has more respect and concern for their confederate statues than for our soldiers – is that free?
At least I am free to speak my mind. I would say some of the freest people around are artists, they get to express themselves through their work. We honor all of them today who tell truth to power. That is our way to freedom!
Today we are showing how some artists depict our flag. Some have choosen neon and barn wood, like Philip Hazard. Others with humor, like Keith Norval. Artists that create jewelry with meaningful themes, like Hsu Studios. Cheryl Edwards, with 151 bullets representing all the types of bullets that have been used to kill people across the country in her work titled Americans V. The detail in this work is Michael Brown.

“The first thing you notice are the spent bullet casings embedded in a spiral against the red and white stripes of the American Flag. Then you notice the pearls in the place of stars, “tears” according to the artist. Looking closely against the red strips you can make out ghostly photo transfer images of black males that have recently made headlines, Eric Garner, Michael Brown, Tamir Rice, Michael Gray, and Trayvon Martin. Edwards points to an image in a hoodie, “that is Barack Obama” in reference to Obama’s remark following the shooting of Trayvon Martin, that if Obama had had a son, he’d look like the 17 year-old boy.”  Maggie Gourlay

Gavin Sewell incorporates different themes in his mixed media collage flags. His work can be commissioned on any subject or theme. We have many of his works here at the gallery, some on canvas and others assemblage wood boxes.
Rachael Bohlander has created a variety of themed flags including a Pride Flag, and Mirror Flag and her Lady Liberty.
Artists are compelled to make statements through their art. We are empaths. Artists explain how people felt throughout history with art, music, dance and many art forms going back to Cave Painting!
My request is that we treat people the way we want to be treated. And let’s not forget to treat mother Nature with respect or we will not be around much longer.
And please VOTE, VOTE, VOTE
Creatively Yours,
Margery Goldberg 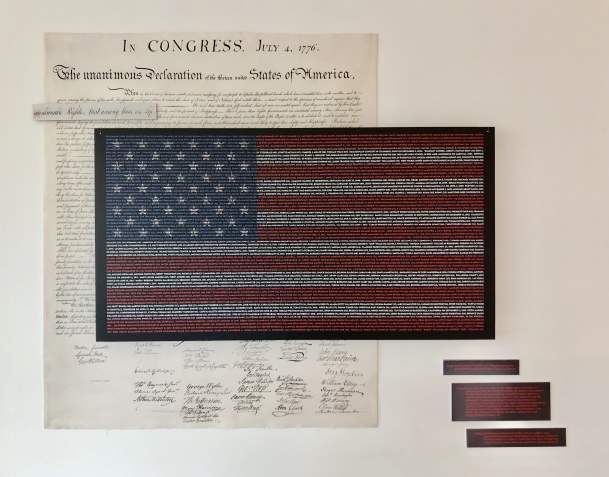 “Alienable Right to Life” by Suzanne Brennan Firstenberg, with names of gun violence victims since Columbine 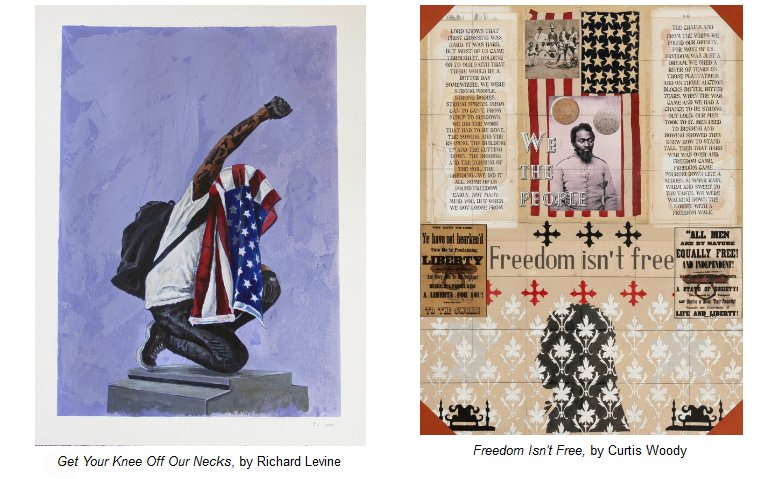 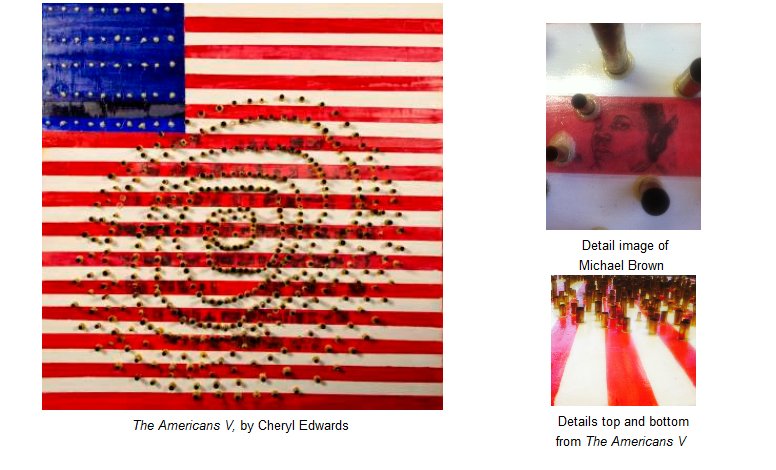 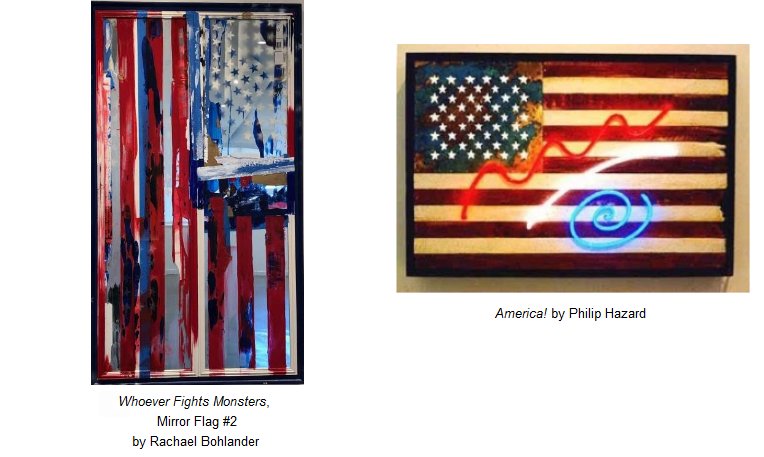