In this new series of paintings, Bradley Stevens honors the artists who have influenced him and the museum goers––in this case, all women––whom he sees as the vanguard of art, culture,and progress in these times.

By returning to his theme of museum interiors, Stevens relives his student years copying Master paintings at the National Gallery of Art and implements the lessons these artists have taught him. With his mastery of color, composition,and gesture, he lures us into the gallery and creates the intimacy of experiencing art.

Inspired by the resurgence of the women’s movement, he has chosen to feature women as advocates of these hallowed museum spaces.Their poses and expressions reveal complete captivation with and immersion in the art, such that the physical and psychological act of “looking” is the subject. Stevens’ introspective museum studies are a meditation on the enduring power of art to educate, inspire and transcend, and on women’s leadership to protect its place in our society.

In his career of over 35 years, Bradley Stevens has forged a reputation as one of America’s leading realist painters. His style is contemporary realism, rooted in classical training yet boldly depicting the modern world with his penetrating eye. Stevens is unique among his peers for his exceptional achievements in three domains of representational art: portraits, landscapes, figurative city-scapes, and interiors. He skillfully combines these genres in his work, creating contemporary portraits of people and places. Stevens’ paintings are widely collected both privately and publicly throughout the United States, including by the U.S. House of Representatives, U.S. Department of State, U.S. Embassy in Paris, Monticello, Mount Vernon,and the nation’s preeminent corporations, universities,and hospitals. His portrait subjects are luminaries and leaders in education, business, law, science, philanthropy,and politics. His painting of Vernon E. Jordan Jr.hangs in the permanent collection of the National Portrait Gallery. Other portraits include Interior Secretary Sally Jewell, Governor Mark Warner,and the family of Senator John D. Rockefeller IV. Stevens’ historical painting commemorating the Connecticut Compromise of 1787 adorns the U.S. Senate Reception Room, next to the Senate Chambers in the U.S. Capitol.

It is rare that an artist maintains a trajectory from the inception of his career, but Bradley Stevens has done that, with detours along the way incorporating events and concerns that influence him. Stevens’ recent solo show at Zenith Gallery, DC, shows the work of a brilliant painter who has assessed the art scene and let us all in on the secrets. Acknowledging the long-held belief that many gallery goers attend art shows not to look at the work, but to look at the people pretending to or looking at the work, Bradley Stevens has shown the people who look and see. Stevens has placed his art viewers in museum venues, not galleries, and they stand alone or in small groups, clearly not attending the opening party. They are concerned with viewing the work. And I find myself viewing them and wondering what they are thinking about the work so splendidly “copied” by Stevens. 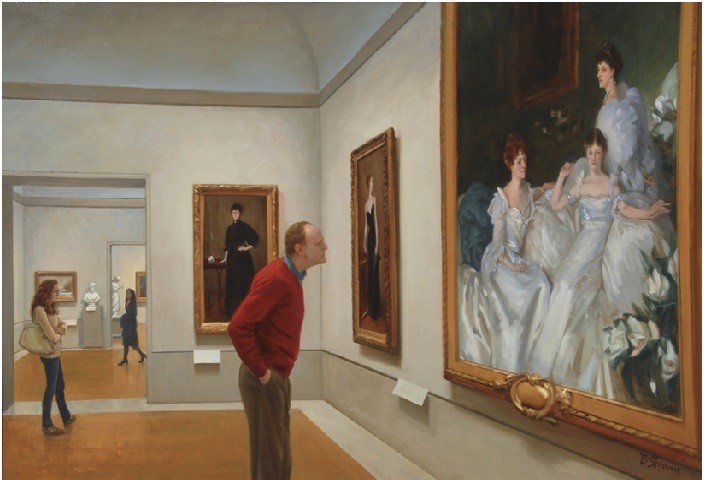 I feel oddly surveillant as I look at his depictions of the facial expressions and physical gestures of the viewers. Allowing the art public to spy on those depicted in the paintings, Stevens has taken observation to an entirely new level as he allows us to watch those viewing the paintings that depict individual sitters watched and seen by the artist.

Although he took art courses as an undergraduate and graduate student at George Washington University in DC, his real training was at the National Gallery of Art where he qualified and worked, three days a week, over five years, copying paintings. Spending hours each day at his easel in front of masterpieces of western art, he faithfully copied artists including Sargent, Rembrandt, Stuart, Peale and others. During and after his academic studies, he painted figurative portraits of famous Americans including American Presidents, finding success and supporting himself. That work was displayed in eminent law firms and in private and museum collections, with his first large sale of five large paintings to Arent, Fox, Kinstler. 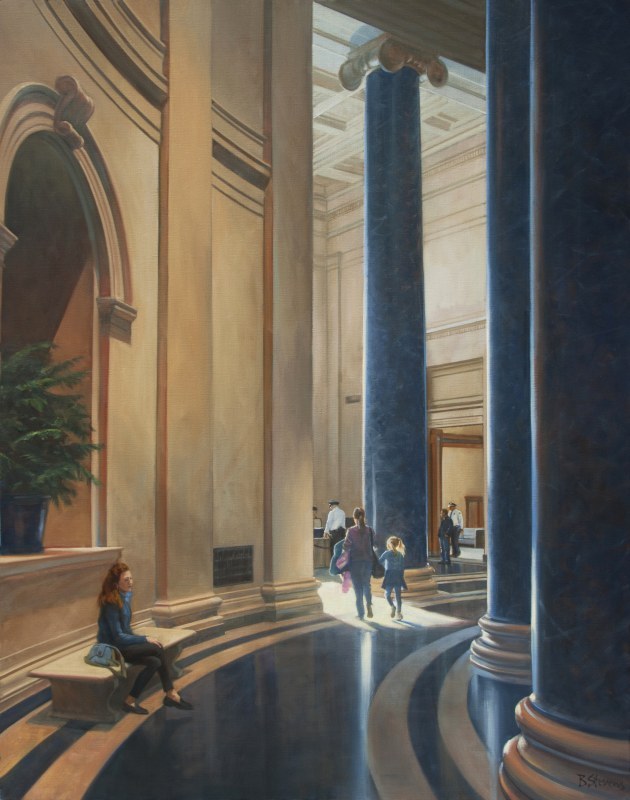 During his student days and throughout his career, he has merged depicting interiors, the grandeur of buildings including the National Gallery of Art and the National Portrait Gallery in Washington, D.C., and the Metropolitan Museum of Art in New York, with the viewers. His master’s thesis, “Geometry and Compositional Designs in Interiors” reflected that interest. He emphasized in interview, “I took art courses at George Washington University, but I got my art education at the National Gallery”, adding “I like most to look at people, what their story is, and I love museums.”

That love, clear in his paintings, leads to an important question: If Bradley Stevens, painter extraordinaire, could educate himself with the oldest method of art education, copying paintings, why is art education at the BFA and MFA level necessary and thriving. Although Stevens is credentialed with a BA and MFA, was it necessary or even relevant to his training and education as a painter?

Further to his education, and ours, Stevens emphasized that artists must concern themselves with their world. Artists are concerned with everything that goes on around them, including politics and other concerns of the populace. Although his painting, “An Art Education” depicts visitors to the National Gallery show, American Light, surrounded by three American luminist landscapes , Winslow Homer’s Breezing Up, depicting young boys in the wind off the New England coast and Whistler’s White Girl (later renamed Symphony in White No.1, and his painting, Connections, depicts Rembrandt’s Portrait of a Lady with an Ostrich Feather, declared by John Walker, former head of Boston University’s art department, “the finest portrait of a woman every painted”, the bridge between women over the centuries is seen in the modern-day viewer enthralled with this old portrait of an old woman.

More political is “Los Ninos,” where an interior of the Metropolitan Museum in New York shows a mother carrying a young boy in her arms looks at the portrait of Consuelo Vanderbilt’s son, Ivor Spencer Churchill, in Boldini’s painting, showing the diversity of museum viewers and those depicted in portraits in this country, having achieved economic and social success. In the distance in this painting, we see Spanish artist Joaquin Sorolo’s painting of children playing in the Mediterranean surf, near Valencia where Consuelo might have come from. 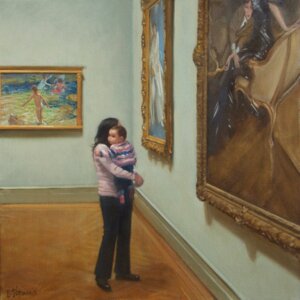 “The Three Graces,” depicting in the East Wing of the National Gallery of Art, Antonio Canova’s sculpture of Naiad, a water nymph, with Goya’s Young Marchesa” and the woman looking at them completes what Bradley Stevens called the triumvirate of women, otherwise named “The Three Graces” by the artist.

This emphasis on political and social identity, and association of women, immigrants, Americans is intentional but there is more. In a recent painting, “Sisterhood,” his wife and her sister look at a sculpture of women and a painting of a woman and child. In “The American Wing,” painted at the National Gallery of Art, a white-haired old woman and a bearded, elderly guard look at the Landsdowne portrait of George Washington, and Martha Washington, both by Gilbert Stuart, while Washington Crossing the Delaware, by Emanuel Leutze, which served as an entree to the successful founding of this country can be seen in the background. This emphasis on women and on patriots is not unfounded. It stems from the recent recognition of the treatment and rights and talents of women. He shows how the woman viewer is inspired to think and act as newly elected women members of congress have been motivated by women’s marches and rallies and sisterhood.

He also shows us how artists technically depict scenes and how museums show work to advantage, as in his paintings “The Artist,” with the viewer looking at a Cezanne in the National Gallery and even more in “Watchful Eye,” with Poplars in the background. He explained “how artists use vertical and horizontal divisions to give the composition a structural framework” saying, “museum architecture serves the same purpose in my paintings.” 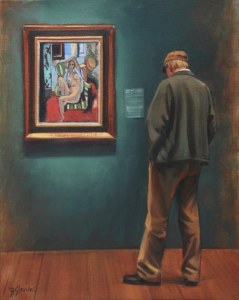 So whereas Brad Stevens is reacting and analyzing the structural composition of paintings and of museum architecture, he is also putting forth his analysis and literal viewpoint of the social structure of society both at the time these paintings were made and currently. This juxtaposition of viewer in current times looking at and identifying with and looking for guidance from American and international forebears at all levels of society is unique to his work, making it not spying but rather enlightening and unifying. By depicting the gestures of viewers Stevens allows his audience to interpret, making us participants parading our surveillance and the artists’ and our staring, as we imagine ourselves there. He states in interview, “artists have to enlighten, paint the truth and emphasize art. Museums mobilize people to see the truth.” He does not take his mission lightly. Nor should we.

More importantly, Brad Stevens implores us to consider who gets to be on the museum walls? Those are generally people of some stature or importance in the history of this nation or of civilization. Those viewing them, in a democracy, get to decide who should be seen. It is a form of voting who is important or relevant, or heroic in the eyes of the demos or the populace. Brad Stevens, in depicting his wife, sister-in-law, elderly people and babes in mothers’ arms is saying that we all get to vote, to decide, who the arbiters and the heroes and heroines of our nation and the world are. In these times, when decisions impacting us all are being made by those many of us do not admire, choosing who is looked at, but more importantly, who looks shows the power of an artist in society to reveal society’s mores, better than a poll.