Visitors to Zenith Gallery’s latest show packed a reception at The Sculpture Space, 1111 Pennsylvania Ave. N.W., DC on September 20. Celebrating African Heritage Month and The Annual Conference of the Congressional Black Caucus, the art was overwhelming, in a good way, towering above the crowd, almost reaching the 12 foot ceilings. Totems and Dogon elders and driftwood figures overs 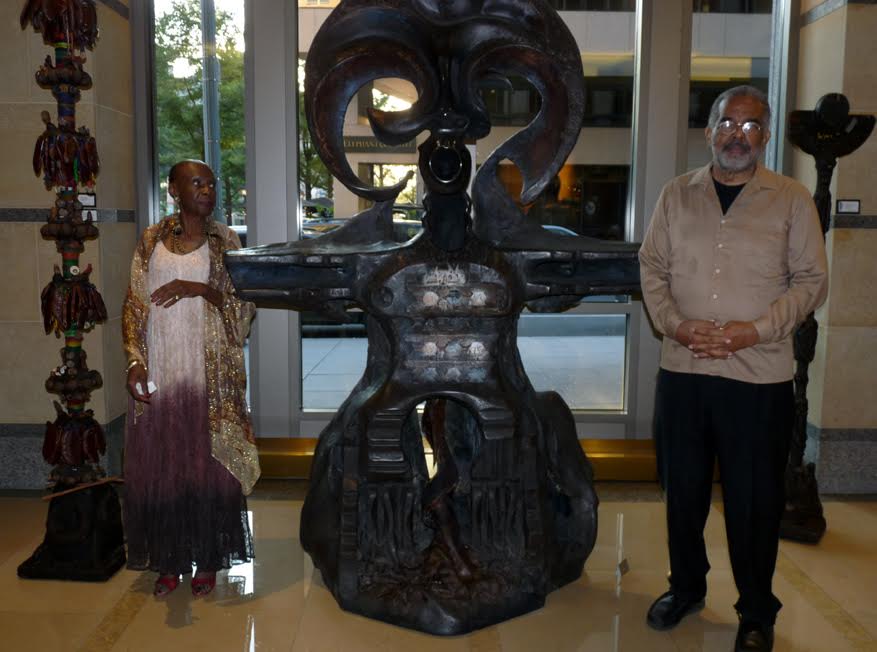 aw quite a celebration.

True to the title of the show, the artists grounded their work in traditions of many cultures, African and Afro-American, incorporating natural materials to produce work that speaks to contemporary issues. Informally talking about their work, the artists explained their art’s cultural significance, noting the symbols and iconography.

Ibou N’Diaye’s wooden sculptures, constructed with traditional Malian hand tools are infused with action and rhythm reminiscent of his Malian past. Chris Malone’s humorous and sometimes frightening spirit dolls recall West African beadwork, as they appear to dance to a West African beat.

Similarly, Anne Bouie created massively tall totem like sculptures incorporating Ghanian symbols. She explained her mixed media, assemblage and sculpture as  “totems that came to me, came into their own,” adding “I love totems, staffs, symbols of the ceremony that sets a tone.”

Pointing to Harvest Staff, Bouie explained, “This staff is called the harvest staff and it recalls the umbrella called the bamkyim that shades the King of Ghana, and protects him as he walks. The staff represents the col 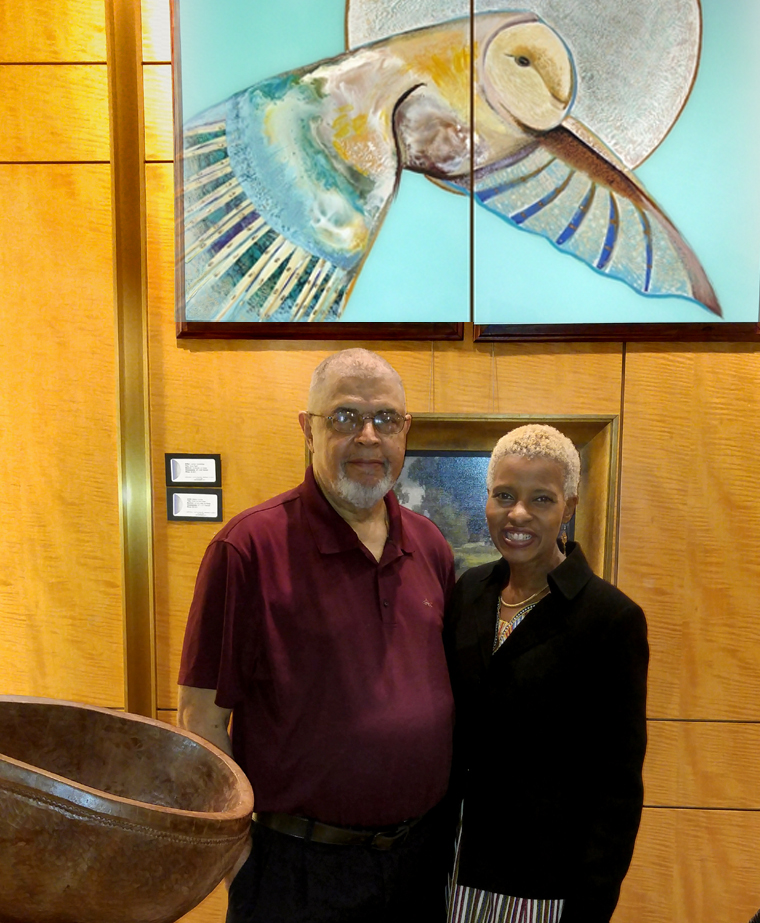 ors and the notion of making a statement about where we are individually and collectively.”  Explaining her use of    botanicals, she pointed out the coffee bean pods, black walnut seeds that are energized, animated pieces that are symbolic.  “People say it says something to me. It represents the fact that art can communicate esoteric universal knowledge through symbols and this represents the different distractions, from the Aboriginal to the Adinka, Canadian and Celtic tradition including the moon from all traditions. I could read this in symbolic language and know what it is saying.  I’m not trying to tell people what to think about in my work, but I hear what resonates with them in my work.”

I understood what Bouie meant, as the work in the show allowed me to contemplate it and feel that the art was listening to my reaction.  Are the artists inventing (or reinventing as the title implies) a theistic tradition with new symbols?

Bouie said about her Guardian Staff,  “It is a guardian, a standing post holding energy. I use a border and do research in symbology and cosmology and how the earth and the world on the other side relate to each other, and express that in my work.”

Chris Malone’s Speaking in Tongues, a colorful figure with a hole through its head, standing without hands or feet, maintains a statuesque presence.

Hubert Jackson’s The Story Teller shows a mother tightly holding all of her family, recalling the love a mother shows through her all-embracing arms. Using found object from Civil Was battlegrounds, Jackson’s highly colored assemblages illustrate a mother’s Thurber-like em 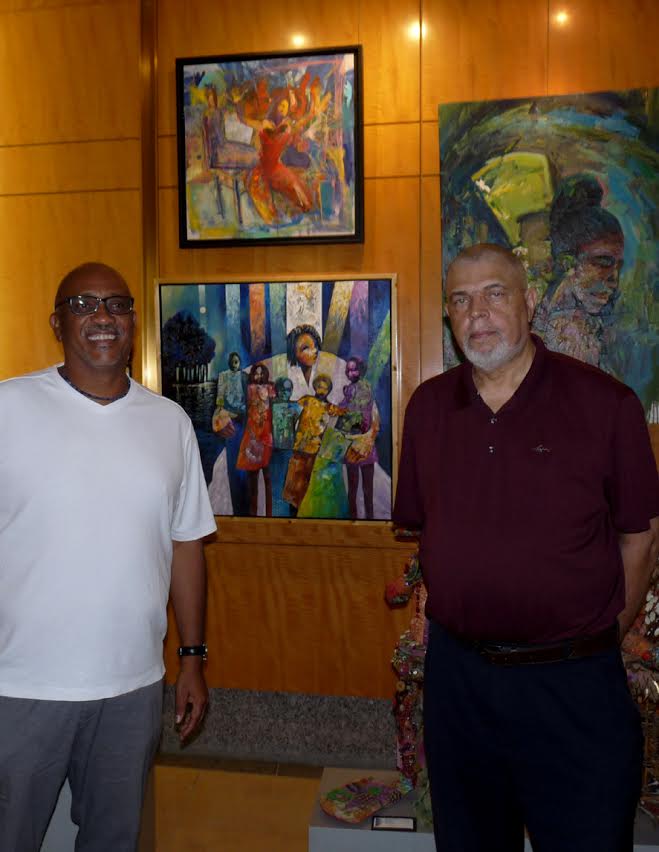 brace amidst the pathos and possibility of losing them to war.

Bernie Houston’s Dress Rehearsal is one of many driftwood pieces fashioned into specific figures, here a dancer, and in other forms in this show, a basketball player called Down Court.   He talked about the form: “I found it on the Maryland side of the Potomac.  I listen to the wood.  The wood tells me what it needs to be.  I try not to deviate from the wood.  All of my work now has become my signature.”  And what a beautiful, graceful signature it is.   There is a melodic flow to his sculptures, whether an athlete or a dancer, emanating from the curves of the wood.

The steel wire forms of Kristin Mays Grace of God envisions a thinker, wire-encased., while her three raised fists symbolize the continuing fight for racial justice.

Preston Sampson’s figure, hands raised against a forest of greenery make me wonder if he is dancing or protesting, or both, or is this, as the name implies, A Thirsty Pope?  The fire behind his head lends a satanic tone to the painted figure.

William Buchanan’s painting Butterflies and Bombs makes me think of the metamorphosis both butterflies and bombs represent, one of life changing and the other of destruction.  The juxtaposition and repetition of the same form, amid luscious colors lend a romantic and perhaps gothic beauty to his work.

In Down by the Creek, by Mason Archie, I see the representation of a formerly enslaved person escaping through the forested shadows, bringing the past into the present.  Reincarnation, by Nigerian artist Doba Afolabi, and Along the River by Robert Freeman offer two versions of female figures, but with very different styles, Freeman’s  recalling  Gaugin and the Afolabi’s, Modigliani. Curtis Wood’s My Soul Has been Anchored, shows us a montage of books, posters, and pages torn from old readers speaking to the plight of African-Americans during slavery and Jim Crow.  Read carefully; it is heartbreaking. 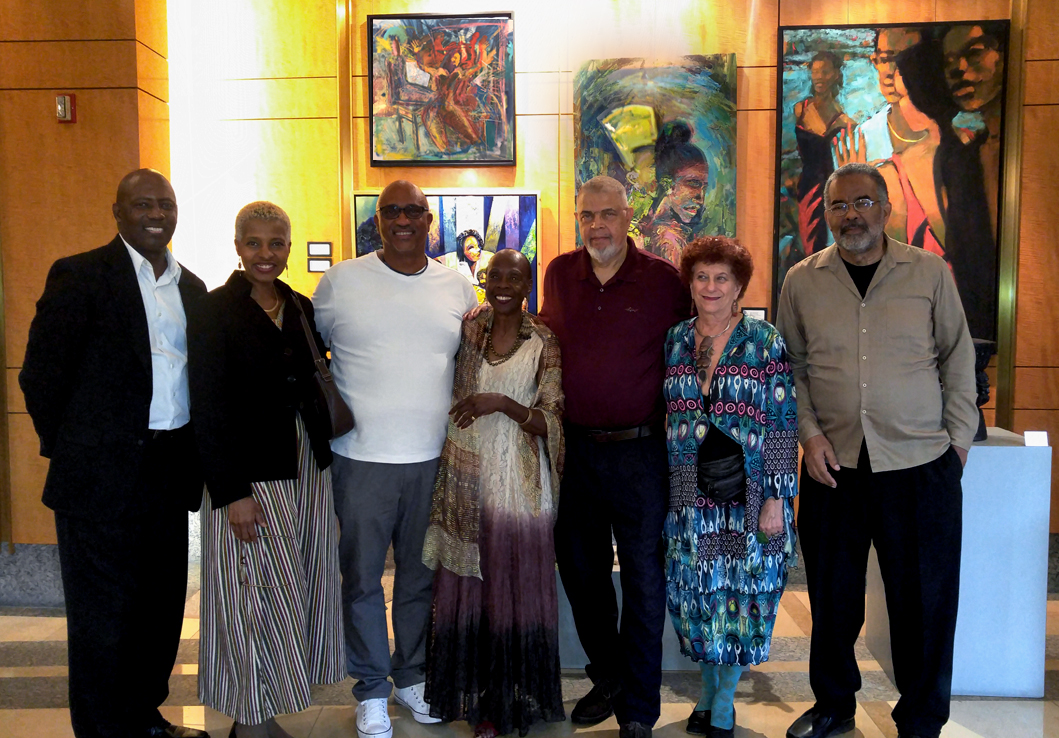 Using similar themes, Akili Ron Anderson’s sculpture Spirit Rocket employs saturated color to imagine an alighting form, while his massive wood and synthetic Akuaba Doll confronts us with the enormity of the traditional symbol.  I imagine them moving in the darkness to find freedom.  Carolyn Goodrich’s Sure Flight, with its light green sky, and kerchiefed winged figure against a full moon extends the story of flying toward freedom by the light of the moon.

Surrounded by color, rhythm, form, the crowds had to keep from dancing the night away, but we are in the nation’s capital on a weeknight.  OH YEAH!