Ladies and Gentlemen, let’s talk about why people make art and perform artistic acts. One of the reasons people make art is to express their thoughts and feelings about what is going on in their world today. And, these days, with our 24/7 news feed, with social media running on hyper-drive, with phones that are almost secondarily considered phones and often primarily considered cameras, social secretaries, soap boxes, and day planners…well, let’s just simplify it – there is no shortage of inspiration for artists.

Let’s take a moment to consider some of the more upsetting, frightening stories of the times: the Charlie Hebdo attack on cartoonists and the subsequent attack on innocent Parisians in a Jewish grocery store, the abduction and torture of innocent young girls in Nigeria, death and destruction throughout the Middle East courtesy of ISIS, the recent Russian and Ukrainian territorial conflict in the Crimean peninsula, young Black men shot seemingly simply because they are – young, male, and Black, living in the United States, and in the wrong place at the wrong time. Guns, bombs, terrorism, and fear mongering abound.

Artists see and hear these stories, and they respond. They mirror what is going on, they reflect it back for their comrades to “see.” Their work is a reflection, in this way, of their times. Often, the most powerful work carries on, and becomes available for future generations to discover. Artwork offers future generations insight into how our society felt about the world we were living in, and people, places, and things in that world. That’s the power of art – it endears beyond the moment, preserving the feelings, ideas, and mood of that moment – a time capsule comprised of poetry, paintings, photographs, buildings, fashion, sculptures, dance, theatre, music, and so forth. 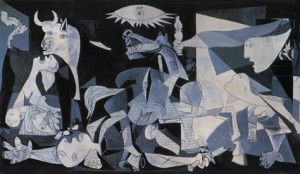 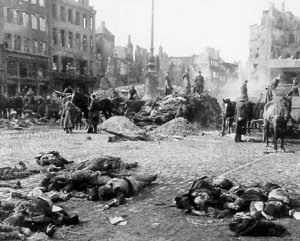 Here are two powerful examples of these phenomena. First, a painting by Pablo Picasso (above) and a photograph of the very event his painting depicts (right):

Of course, many of you already are familiar with this painting. It’s Guernica. It’s one of the most important works of art ever created, certainly one of the most powerful depictions of the atrocity of war ever conceived. Guernica is a portrayal of the aerial destruction of a Basque town by fascists during the Spanish Civil War. It’s also a groundbreaking work in that it does not limit its depiction of the war to a photo-realistic depiction, but rather includes the psychological and metaphysical aftermath. Around the world, images copied from and inspired by it have appeared on placards, fliers, and t-shirts. After the U.S. bloodbath in Fallujah in 2004, Pepe Escobar of the Asia Times wrote that “Fallujah is the new Guernica,” and journalists Jonathan Steele and Dahr Jamail referred to the siege as “Our Guernica.” In a 1945 interview, Picasso expressed the below sentiment. Later, Boeck and Sabartes include this quote in their biography “Picasso,” which was published by Harry N. Abrams in 1955.

What do you think an artist is? An imbecile who has nothing but eyes if he is a painter, or ears if he is a musician, or a lyre at every level of his heart if he is a poet, or nothing but muscles if he is a boxer? Quite the contrary, he is at the same time a political being, constantly aware of what goes on in the world, whether it be harrowing, bitter, or sweet, and he cannot help being shaped by it. How would it be possible not to take an interest in other people, and to withdraw into an ivory tower from participation in their existence? No, painting is not interior decoration. It is an instrument of war for attack and defense against the enemy.

Now, let’s take a look at “The Ascent of Man” by one of our artists, Reuben Neugass. This piece features ink on wooden panels. The overall dimensions are 12” x 40.” The connection the artist makes between instruments of war and profits is blunt, powerful, and profound.

Perhaps most telling is the last panel, which depicts an absence of anything – an utter void – nothingness. Let’s hope we learn from our mistakes before we reach this phase in our ‘ascent.’ 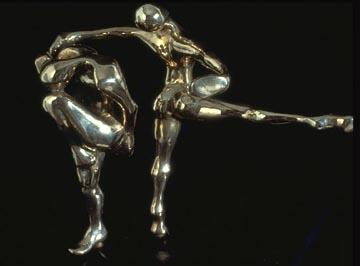 Here’s another piece, by another one of our artists, to consider. The artist is Carol Newmyer. The piece is titled “Joy and Sorrow.” It’s a cast bronze piece, depicting the universal struggle for humanity to rise above our baser natures and achieve a transcendent state of peace and nirvana. One figure is reaching out enthusiastically and joyfully, ready to leap into action and embracing the possibilities. Their back is arched, their arms are spread wide, they are lifting their head up, kicking their leg out – it’s as open as a human can physically be, a jubilant stance. Meanwhile, the other figure in this piece is sorrowfully closed off. It is as if the artist is saying that being open brings joy, while being closed brings only sorrow. This is worth contemplating, when we consider how we could prevent any future terrorist attacks – in Paris, in New York City, at the finish line of the Boston Marathon, in Jerusalem, or elsewhere. Let’s take Carol’s advice and be open to what our world has to offer, and present ourselves as joyfully aware, rather than closed off and turned inwards.