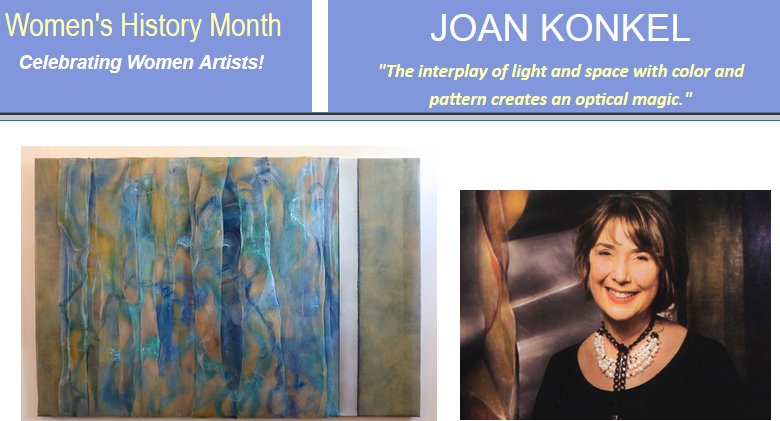 Zenith Gallery has had a long history with Joan Konkel.  During the 1980s Joan was a wearable art designer and we showed and sold her unique clothing though our wearable art fashion shows. A decade went by and I had not heard from Joan, until one day I received an email from her showing her new work. She had taken off that time to raise her children. I immediately told her “don’t go to any other gallery, I love the new work!” We have been showing it ever since. She is now represented in galleries across the country, but we are thrilled to be her first.
Joan’s work is exactly what Zenith is about. Unique in concept and medium and combined in ways no one has thought of before, she creates sculptural, three dimensional paintings that shimmer with a beautiful moiré effect. In mathematics, physics, and art, moiré patterns are interference patterns that are produced when an opaque ruled pattern with transparent gaps is overlaid on another similar pattern. 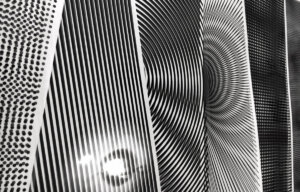 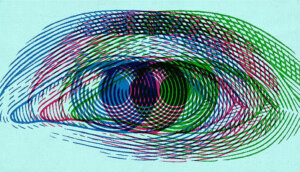 Joan combines layers of aluminum or acrylic mesh with other materials, canvas, and paint, creating a subtle visual effect as if the painting were moving in front of your eyes, even as you stand still, and looks different from every angle.

Joan’s talents keep expanding turning to sculpture, both free standing and wall relief. We salute Joan for her continued creativity, love and integrity, in art and in life. Much of her work is done on a commission basis, adapted to fit the client’s wall or space.

“My work is a visual labyrinth, active with shifting colors and patterns. Within the labyrinth I attempt to capture a bit of the magic and joy of phenomena, in essence one small facet of the complex, mysterious universe we inhabit.Color begins on a canvas and flows into another dimension where it is capable of transformation. It travels through painted strands of finely woven mesh, a material perforated with space that provides pathways not only for the transfer of color, but for the infusion of light.
The forces of light are intensified, refracting not only off painted canvas, but also off thousands of strands of colored mesh. Within this realm, optical illusions and physics play with one’s perception. Metal might appear ethereal. A shimmering luminescence can appear. Colors change from different perspectives and sometimes fracture into bi-colored moiré patterns. This is just a sample of the naturally occurring gifts that surround us, a reminder of the marvel of our universe”.              … Joan Konkel